The Crucifixion of Rikers Ysland 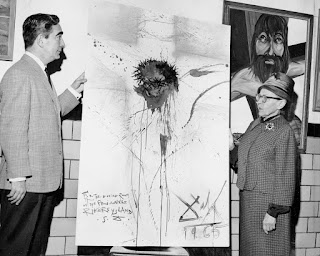 I have a new piece in Hard Crackers contextualizing the 2003 Rikers Island Art Heist, undertaken by four exceptionally brazen – and apparently, inept – high-ranking jail guards. The story has since been recounted as a tragicomedy of "stupid crooks," and surely the shoe fits. But I argue it offers a more fundamental lesson about the nature of truth in carceral facilities, and its relationship to the violence that structures daily life for incarcerated people.
at October 17, 2019 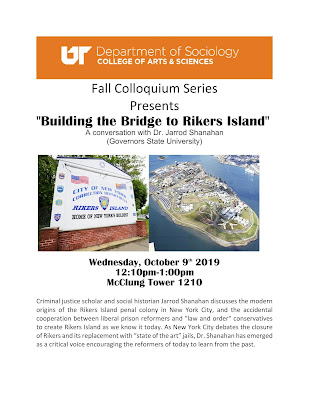 On Wednesday, October 9th I will have the honor of speaking at University of Tennessee, Knoxville, as part of the Fall Colloquium Series put on by the Department of Sociology. I will be speaking on a familiar topic: how a mid-century jail reform movement in the New York City Department of Correction paved the way for the Rikers Island of today.

If you can't make it out to Knoxville, check out "A Jail to End All Jails," an article Jack Norton and I wrote a few years back. In it, we outline how the mid-century jail reform program of Anna M. Kross and her humanist cohort inadvertently built the bridge, quite literally, the the Rikers Island of today.

As jail reformers in New York City once more attempt to solve the problems of incarceration with better jails, attention to this history is essential. For a practical alternative to the dead end of prison reform, check out the abolitionist program offered by No New Jails NYC. This group, operating on the right side of history, has a practical plan to decarcerate New York City, and replace Rikers Island with no new jails. Anyone concerned with actually fixing the mess of mass incarceration should support this group any way they can.