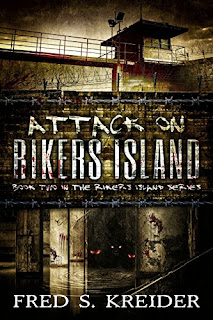 I have published the second of six reviews chronicling the pseudonymous Fred S. Kreider’s Rikers Island Series, a horror franchise set on present-day Rikers Island. In the first installment we met narrator Nicholas Billings, a rookie guard whose scrupulous recounting of guard life at Rikers is often more grim and terrifying than the book’s horror story, constituting detailed workplace writing evincing an intimate knowledge of the island’s institutional life.

In Attack on Rikers Island, the island is beset by an army of malevolent mutant rodents, the legacy of the island's history as a landfill worked upon by forced labor in the early twentieth century.

Two down, four to go.
Posted by Jarrod Shanahan at 6:57 PM