Hard Crackers #2 is now available for purchase online! I have a short piece about fine dining behind bars, which I wrote before I realized that dude Prodigy from Mobb Deep has a book of prison recipes out this year. Oh well. Below is Noel Ignatiev's editorial introduction to this issue, which really sets the table for what you're in for this time around: 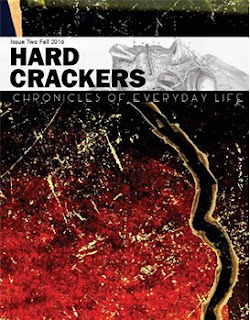 Welcome to the second issue of Hard Crackers: Chronicles of Everyday Life, with reports from north and south, New England to California and up and down the Midwest, depicting life at work, in prison, on the street, efforts to save communities, reminiscences of growing up in another time and comments on films old and new. There are obvious gaps in our coverage, which we hope to fill in future issues.

As we send this issue off to be laid out and printed, we note three things happening in the country: 1) the prison strike called for September 9; 2) Standing Rock, North Dakota; 3) Charlotte, North Carolina. It is too soon to provide analyses; for now it is enough to know which side we are on.

CNN interviewed an unnamed person in Charlotte who assisted a protestor:

UNNAMED PERSON: “I left the hospital after an asthma attack. I went to Buffalo Wild Wings. I was
walking down the street with my wings. I saw a man on the ground bleeding. I helped carry him into the Omni hotel. The police were not helping. Gosh! They held me there in custody. I ended back in the hospital with an asthma attack.

CNN INTERVIEWER: “You mean you had a second asthma attack in the tear gas, and you are back out on the street again tonight! Why are you there?”

UNNAMED PERSON: “I used to just walk around. Now I have to walk around with an inhaler. But you have to take a stand. If you do not stand for something you will die for nothing.”

That is why we publish Hard Crackers.