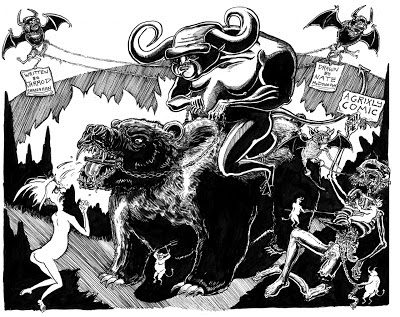 You are looking at an excerpt from Satan Was So Over It, a new graphic novella written by yours truly and illustrated by the inimitable Nate MacDonough of Grixly. It's the heartfelt story of the Lord of the Underworld being rocked by a mid-life crisis, losing faith in evil, and the chance encounter in a Brooklyn bar that restores his will to do awful things to innocent people. It will be available from Grixly in February. If you've seen any of Nate's other releases you know that its going to look fierce. And you can bet we'll have a release party!

2013 will also see the revival of Death Panel Reading Series! The details are still being worked out, but we're happy to announce the 2013 premier on January 27th at the Launch Pad in Crown Heights. Hopefully we can raise some money for our friends from The Cage, who are still working to build The Brooklyn Base, a much-needed community resource for our area.

Finally, I've been enjoying a bit of a creative explosion. I completed a novella that I'm now shopping around entitled It's A Tough Economy. I've also been doing some downright silly shit, like this most recent piece for Vice published just today, about the horrifying prospect of a party in 3012. Who knows, maybe I'll start updating this thing more often ;)

In short, its a good time to be the kid. I'm really looking forward to 2013, to working with all the brilliant creative people in my life, and making shit happen for real. Get at me if you want to start some trouble!!