The Lippman Commission and Carceral Devolution in New York City 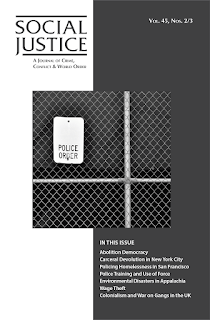 As New York City debates the most dramatic transformation of its jail infrastructure in almost a century, I had the honor of co-authoring a critical assessment for Social Justice, with my fellow social justice warrior Dr. Zhandarka Kurti. Drawing largely on Zhana's extensive research into probation and "alternatives to incarceration" we critical engage with the specifics of the original plan to downsize and relocate the city's jail system.

Some of the details are a bit dated given the lengthy turnover time of academic publishing, but the substance of the critique remains highly relevant: namely, if the city downsizes its jail population by shifting its burden to other tentacles of the carceral state, the communities most devastated by mass incarceration could very well be no less entangled in this pernicious net than before. Click here to read the full article, and consider checking out the campaign for No New Jails, presently striving to build a grassroots alternative to the vision outlined by the Lippman Commission.