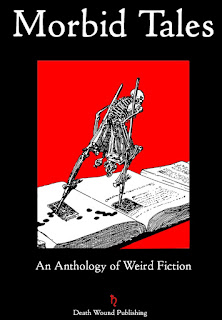 Death Wound Publishing has been generous enough to publish one of the strangest essays I've ever written, "The Marriage of Maria Braun, Sequel to Ilsa, She Wolf of the SS" in a short fiction anthology available now! It's a must-read for all fans of Rainer Werner Fassbinder, the most execrable dregs of exploitation cinema, and Michel Foucault's 1978 lecture series The Birth of Biopolitics. So, basically... nobody.

The essay appears in an anthology entitled Morbid Tales: An Anthology of Weird Fiction, alongside nine other stories that are equally, if not more, bat shit insane. Needless to say I recommend everybody get a copy, along with DW's other dope publications.

This essay is part of a planned "Sequel To" series. I have also written "Bad Lieutenant, Sequel to Blue Collar", which may see the light one of these days. Say something nice about this one and I may write another.