The articles in the premiere issue of Hard Crackers were just the kind that I dote on. They remind me of Harvey Swados’s classic 1957 Bildungsroman “On the Line”, a collection of stories about being an auto worker in the Mahwah Ford Plant. Or Michael Yates’s In and Out of the Working Class. Or even the novels and short stories of Charles Bukowski, who while by no means being a Marxist, conveyed through his fiction the observation made by Karl Marx in Economic and Philosophical Manuscripts of 1844: “…the worker feels himself only when he is not working; when he is working, he does not feel himself. He is at home when he is not working, and not at home when he is working.”

We're working on Issue 2 right now, and I don't think Louis will be disappointed.

On the workplace front, my group CUNY Struggle has been part of an exciting grassroots campaign to defeat a terrible union contract being rushed through without debate in the summer while many people are away. Check out CUNYStruggle.org for a number of fantastic pieces making the case for a NO! vote. We had an action two weeks ago that got some press, and have otherwise been getting a little publicity here and there. I wrote a position piece on a NO! vote, which I left unsigned since the ideas came from everyone, especially Ruth Wangerin. I was also quoted to this effect in the Chronicle of Higher Education, in a piece languishing behind a paywall. Here is the video I made as a part of our "Faces of the NO! Campaign" project, where I expand on the same points.

Hi readers! I have a new piece in my favorite hand made punk rock vegan zine with a strong female lead, Marmalade Umlaut. "Cruelty Free in a Cruel World" documents the struggle to keep a vegan diet behind bars. It can be done! 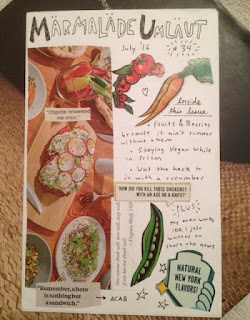 To order, click on over to Food Feud and order Issue #34 (and all the other issues!) in the right sidebar. Thanks to MU for having this piece, and stop eating animals, it's just tacky.

My piece "Some Bullshit" from Hard Crackers #1 now online 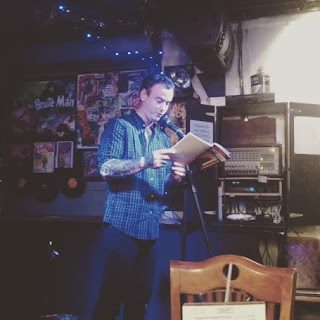 Thanks to everyone who came out to the release event last month, the other readers Mike Morgan, Tony Maniscalco, and Andy Folk, John Garvey and Noel for emceeing the event, and to Andy B for making actual hard tack! It was disgusting but strangely compelling. "Tough and edgy", as Marcus Rediker called issue #1. Here's a photo of me reading. Thanks to Maud for the photo, and to Ben Sherman on Mercer Street for going out of business and providing me with such a snazzy shirt.

My piece "Some Bullshit" is now available to read on the new HC website. You can also check out the growing responses to Issue #1, collected on our website, and this cranky and ultimately generous review written by Paul Buhle as a part of his "Good Summer Reading on the Left".